Dr Katie Steckles (From Think-maths.co.uk) visited Walthamstow School for Girls and delivered some engaging mathematical talks to students from Henry Maynard, Chingford Foundation, Greenleaf and all of our Year 7 students. She spoke about and illustrated her favourite mathematical shapes, in reverse order – the Sphere, Möbius strip and Torus. Here is some feedback from the students:

Dr Katie Steckles came to our school and spoke about her three favourite shapes and how maths can be fun. Katie did a degree in maths, some more research to become a doctor of mathematics and now goes to schools and science festivals to talk about it.  She shows children how maths can be amusing and fun which is just about right!
Her third favourite shape is the sphere. The reason she likes it is because if you do three 90 degree turns, you get back to where you started. This is really cool as on paper, the angles in a triangle add up to 180 degrees but if the triangle is drawn on a sphere they don’t. She showed us a trick with our hands that works because the elbow is at the centre of a sphere. In my opinion she is awesome and I agree that the sphere is cool!
Julia 7H

Her second favourite shape is a Möbius strip. It was named after a man called August Möbius . He discovered it by twisting a bit of paper and taping the ends together. If you were to draw a line across the strip you will come back to your starting point having drawn a line all around it. There are all kinds of things you can make using a Möbius strip  , like a square and interlocking hearts. Dr Katie Steckles has her own YouTube channel where she does other cool maths experiments.
Ornelda 7C

During the last few moments of the maths talk with Dr Katie Steckles, she was talking about her final, favourite shape, the Torus.
The Torus is the official name for a donut shape. Why is this her favourite shape? 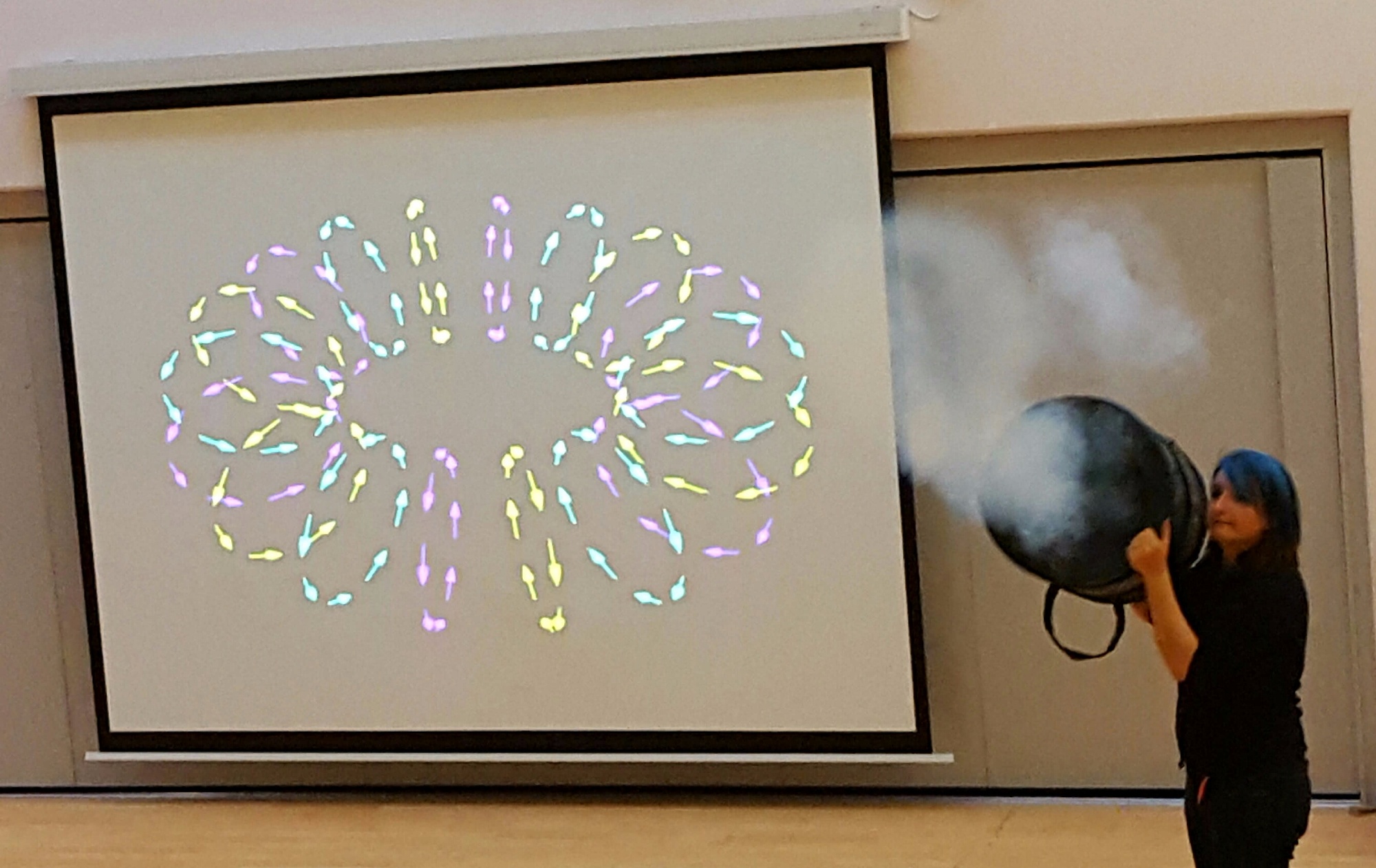 Katie showed us an exciting performance to explain why. To illustrate the Torus she made smoke rings. How? Well, she brought a garden bin-like thing with her which had a black plastic bin bag attached to it. However the bin bag was tied at the back therefore making a handle type thing. Katie also brought along her smoke machine. To make the smoke rings she ‘stuffed’ the bin bag\garden bin thing with the smoke from the smoke machine.  After she would fiercely push in the bin bag at the end causing the smoke to come out. Amazingly the smoke ball would change into a smoke ring! Flabbergasted, me and my fellow year 7’s exclaimed: “HOW ON EARTH DID YOU DO THAT!?”  Some of us also said “WOW!”
Katie explained how and why it turned into a ring.
“The smoke ring is produced due to the difference in pressure on the outside and inside of the ring. That also causes the smoke that makes up the ring to rotate.”
After her explanation we begged her for more smoke rings. Thankfully she did so.  Sadly the workshop came to an end and we said our goodbyes to Katie, her many shapes and her smoke machine! Afterwards we were allowed a quick photo shoot with Katie and now I promise you its … goodbye!
Siwan 7H

Here is a link to Katie’s YouTube channel which is well worth a visit: