Reflections on the New Zealand Attacks

Students are encouraged to talk and write about the tragedy 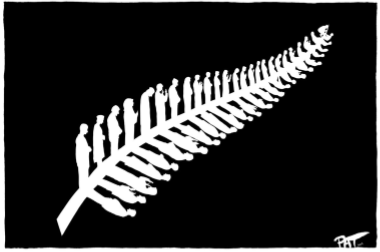 An Australian cartoonist reimagined New Zealand’s national floral emblem in memory of the Muslims slain in the mass shootings at two mosques in Christchurch.

The country’s Silver Fern here represents each person killed by the gunman.

Our school community was deeply moved by the events.

Here are some comments from our students:

“I think the shooting was a very upsetting tragedy. 50 innocent lives lost is very heart-breaking. The people praying on the leaf shows that we are all equal no matter what religion you are, and we shouldn’t have to fear being attacked based on our personal beliefs. We should treat everybody with the same respect. It also shows that in New Zealand and everywhere, everybody is welcome. During a time like this, we must stand up for what’s right and come together as a society. We are all people, and nobody was born discriminating against others. It might just seem like 50 random people you don’t know, but put yourself in their families’ shoes. They are not just another statistic. "
Iqra 7S

"I am a twelve year old girl, halfway through Year 7. I’m sure there are many others like me around the world. However none just like me as I am special. Everyone is special and everyone is different from each other. Difference is never something anyone should be wronged for or be discriminated for. This is why I believe that what happened in New Zealand on the 15th March, just because no one is the same was a disgusting, horrible act. This piece of artwork is a memorial to show 50 lives were taken. Taken by hatred that shouldn’t exist. Many people are probably reading this and agreeing with what I have written but aren’t doing anything about it. Just sitting, reading, and agreeing. And I know that a paragraph might not be a lot but it is something. Something that I hope will change people’s opinions, thoughts and ideas about difference being bad because it isn’t true. It is the beauty of this world."
Lily 7S

"I believe that the shootings in New Zealand show how much progress still needs to be made in the world as a whole. Some people might say we’ve come so far since World war one and two, but we need to take into consideration the fact that innocent people are still killed because of their race and religion, and this fact haunts me every day. The silver fern is a perfect way of bringing the families and people affected respect and peace. We’re all deeply affected and hope one day this won’t be something we need to write about."
Isis 9F

"I feel that it is important to try and take something as terrible as the New Zealand terrorist attack and try and create something peaceful that carries a message to help prevent something like this ever happening again. The emblem to me is the artist using tragic event to try and campaign against extremism and also doing his part to make sure the victims rest in peace."
Jemima 9W

"It’s hard sometimes to think about tragedies like this, especially when they have taken place far away to people you don’t know. It takes courage to think that it has actually happened to actual people with actual lives but that courage is exactly what we need as a society right now."
Sophia 8W

"I used to live near New Zealand so I heard about it all the time. It is such a peaceful and beautiful country. To hear that something like this has happened is devastating. When I found out that the gunman was Australian born I was almost disappointed. I am Australian and we do not usually hear about things like this. The painting that the Australian cartoon artist has done is very meaningful and beautiful. I love how he has represented all of the people killed and how they are praying in different ways. This incident has affected the whole world and I hope that everyone has realised that doing this is an absolutely terrible thing. Although many people believe that a number of deaths is just a statistic they are wrong. Each and every one of those people killed had a home, family and a life. They are all worthy of existence."
Emelda 8G

And a wonderful poem too:

Holland, New Zealand, China
What do these countries have in common?
Shootings
Shootings and shootings
People are dying and nobody cares
Nobody cares cause none of them are here
This is a wakeup call
Muggy Mike’s death was labelled as a wakeup call
49 people shot dead, and they only have themselves to blame
Is this society, this
This is the world we live in
You want to sit here and tell me that you care for the world
You care for the world, how you care
Innocent people are dying and you don’t want to raise your voice,
You don’t want to raise your voice cause you don’t want to stand out
You don’t want to stand out, fine stay where you are
You sit behind your screen and post pray for
Cause that’s what your friends are doing right
Pray for New Zealand
Pray for Holland
You want to make a change but your friends are too busy
Your friends are too busy, so you watch innocent people ide
But it’s ok, cause you’re a good person inside
Good person inside, why not out
afraid your will have an impact
Afraid that people want to hear what you have to say
Afraid that your friends won’t agree
Right, your friends won’t agree
Don’t sit here and convince yourself you’re a good person
When you don’t make a change in the world
But you, the same person who was too afraid
Will come back in 10 years and say
Yeah maybe I could have made a change
Yeah could have…
But you let innocent people die because you weren’t comfortable with saving them
You were afraid of having an impact
The impact you could have had in the world
Could have meant
More hearts got to beat once again…
by Saira 11C