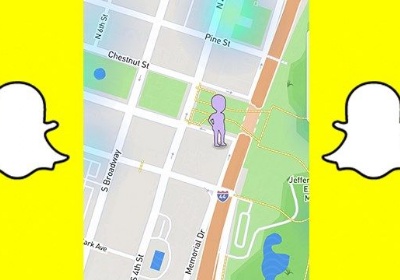 If you don't opt-out, your location is visible

Schools are warning parents that a new location-sharing feature in Snapchat could put children at risk.

In a letter seen by the BBC, one school said the map raised "serious safeguarding concerns" because children could be tracked on the map.

But Snap, the company behind Snapchat, says the feature is opt-in and can be switched off at any time.

What is Snap Map?

Snap Map was launched on 21 June and lets people browse a map of photos and videos that have been shared publicly.

It also lets people share their exact location with those they have added as "friends" in the app.

Users who are sharing their location appear on the map as a cartoon avatar.

What are the concerns?

Some schools have criticised the accuracy of the location-sharing feature, with one warning that it could be used to "build up a picture of home addresses, travel routes, schools and workplaces".

While location information is shared only with people on your "friends" list, that could include people you do not actually know, such as friends met on other apps and websites.

Others have criticised the way the map was added to Snapchat without a detailed announcement explaining exactly how it worked.

"We know tech companies are constantly developing their platforms and we'd encourage them to provide signposted information for parents and young people, so they know how to keep themselves safe," said Rose Bray from the NSPCC.

"Parents could be given a bit of warning, so they can look up the information before the new feature launches, and have a conversation with their child."

One mother, Paula, told BBC Breakfast she was surprised to find her 11-year-old son had opted in to share his location.

"I didn't know anything about it," she said. "Somebody had told him about it, one of his friends at school.

"I was a little bit worried about the fact that you could be pinpointed. Obviously there are predators, there are bullies."

Paula said she had discussed the feature with her son and they had agreed he would enable "ghost mode" to disappear from the map.

What does Snapchat say?

In a statement, Snap said: "The safety of our community is very important to us and we want to make sure that all Snapchatters, parents and educators have accurate information about how the Snap Map works."

The company stressed that location sharing on Snap Map was off by default, was an opt-in feature and could be switched off at any time.

It told the BBC that the feature had to be accurate so that friends could use it to find one another and meet up.

It added that "the majority of interactions on Snapchat take place between close friends", unlike some social networks that are designed for people to discover and follow new friends.

However, when asked by the BBC why it had not warned users that the map was about to be launched, the company did not comment.

The National Crime Agency's Child Exploitation and Online Protection command (Ceop) has published guidance for parents who want to know more about Snapchat and Snap Map.

How can you opt out of Snap Map?

The BBC's Newsround programme has produced this short guide, explaining how to switch off location sharing.