Reported by one of our Young Reporters

As the country went to the polls in a snap general election, students at Walthamstow Shool for Girls experienced democracy first hand by concurrently running a mock election on Thursday 12th December. However, students had to create their own political parties with policies on improving the school.

This caused great excitement and on 29th November, registration forms were sent out to apply for candidacy. In order to apply, you had to state your party’s policies and attend a meeting the following day.

The policies each party pitched varied, from environmental concerns to student welfare and mental health. The Walthamstow Diverse Democracy even considered how they would tackle wide-world issues. However, Getaway Friday won by a landslide due to their particularly appealing policy on reducing school hours on Friday.

The following week, hustings took place daily at different year group assemblies in which they had only 2 minutes to present and promote their party. Campaigning also took place in other forms such as posters -which plastered school walls- and flyers all in a frantic attempt to be heard. However, each party had a limited budget of 25 A4 pages in order to enforce our "Green Vision”.

Fatimah 12, a candidate of The L.I.F.E Party said: “Although we didn’t win, this was a great experience and was a great challenge that has helped me become more politically aware.”

Wendy 14, a candidate of Your voice said: “It was much harder than I thought and has definitely been unpredictable, much like the real elections, but it still was a great learning experience.”

Mock Elections actively engage pupils with the democratic process and help raise awareness of how politics affects our everyday lives. It has provided pupils with the opportunity to gain an insight into the election process; from creating manifestos to designing campaign posters. Meanwhile, students not participating also gained experience as they helped organise the election itself by registering voters,  preparing the polling station and counting the ballot papers. Overall the turnout and feedback was incredible and could even be described as reaching “election fever”.  It also allowed students to voice their opinions on improving our school. 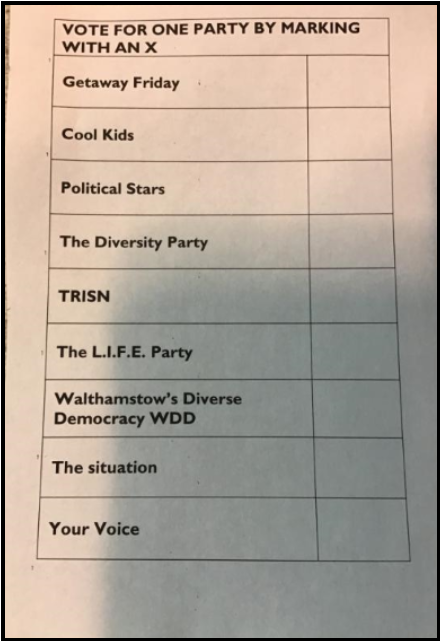