My intention, when I produced this painting of a Black woman, was to represent the BLM movement through the image and what is implied by it.

Her hair deliberately stands out a lot, which for me is a big part of black culture, cultural appropriation, and cultural appreciation. The crown, comfortably sitting at the top of her head, replaces the fact that she does not have any facial features (e.g. eyes, nose, lips etc.). I chose to represent her in this way because, in my opinion, a lot of Black people must “put a face on” for the rest of the world because of the stereotypical opinions, perceptions and views that the world has of Black men, women and children. It also shows the strength used to do this. 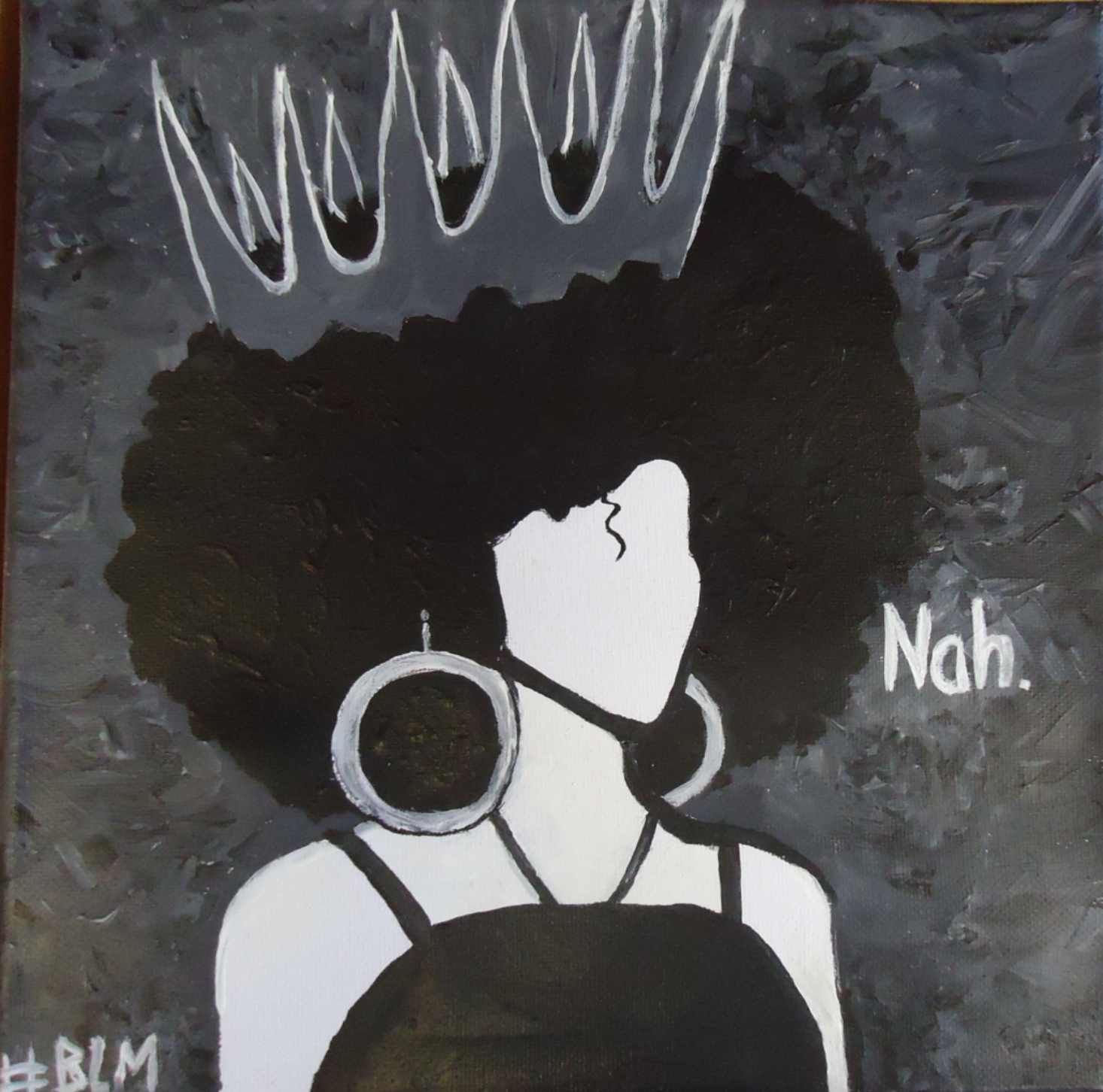 The Learning Resource Centre now has a copy of Freedom Walk: The Roots of Diversity in Waltham Forest by Peter Ashan. 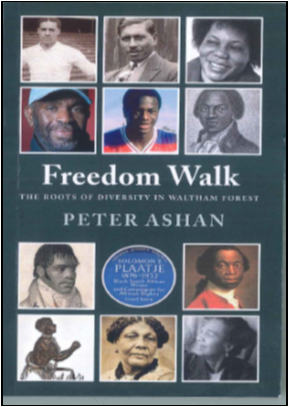 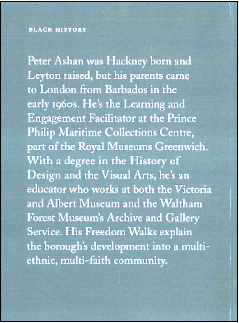 A Message for our WSFG Community

I hope you and your family are well and safe.  Hopefully, now, with the gradual easing of the lockdown restrictions, you may have been able to start meeting members of your extended family and some of your friends. Please stay safe.

We have been confined for many weeks now but the last one has been particularly difficult as with the killing of George Floyd, it has become even more emotional and upsetting. Protests have been happening all over the world and in London at Hyde Park. The key message of these protests is that racism in all its forms must end. We all have a part to play in helping towards a more equal world.

In our school, Equal Opportunities and Diversity are key. We aim to inspire a love of learning and a genuine respect for all members of our multi-cultural, multi-faith community. We ensure that everyone is treated fairly and with respect. All cultures and languages are valued equally regardless of numbers.

It is vital that during this time we stand with our black community and show our solidarity.

Make sure that you keep up to date with what’s going on in the news, you read the articles on the Diversity page and in the  Diversity magazine.

You will also find really useful resources in The Day and VotesforSchools in our school Greensheet.

Take a look at this video about implicit bias and systemic racism, it gives a very clear explanation of the American system.

Some of this week’s assignments might be a bit different as we wish to show our support, to facilitate reflection and greater understanding. We also want to encourage healthy discussions at home.

On a whole school level, when school fully returns to normal, there are many charities we can reach out to and work with. I would definitely like to involve our Diversity students to discuss how they want to support in our meetings so they share their ideas and get their voices heard.

Please continue to stay calm and to look after your mental wellbeing.  Remember if you have any general school issues or you are having problems with Teams, please contact us at info@wsfg.waltham.sch.uk 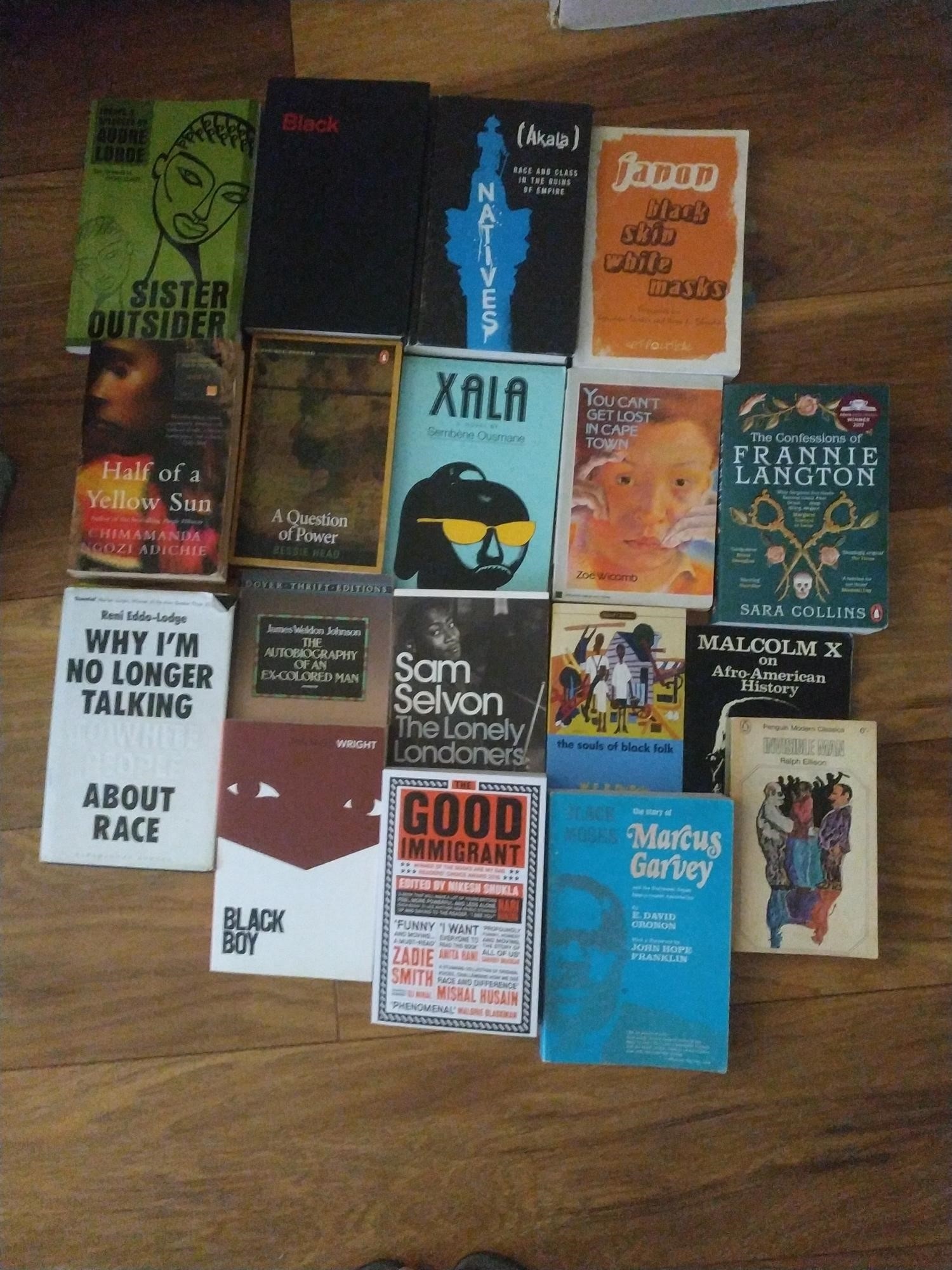 We have all been deeply saddened by the news of George Floyd’s tragic murder; however, we all know that this is not a one-off tragic event, this is something that happens regularly to black people. We all must be aware of the systemic failures across the world that mean our black community are still treated differently.

Those of you who have been taught by me know that I love to read! I try to read as widely as possible as I believe that reading a diverse range of books allows you to understand people and the world around you in a beneficial way. It is also so important that you see characters like yourselves in books. As you know most of my books are on the windowsills in my classroom, however, I have some important books at home that I wanted to share with you. They include fiction and non-fiction.

As well as those in the photograph, I have put together a list of some texts I have read that are written by black authors. I am sure over the next few days I will remember some more fantastic books, so I will keep adding to the list.

I am thinking of you all.

A Grain of Wheat by Ngugi wa Thiong’o

Ain’t I a Woman: Black women and Feminism by bell hooks

An American Marriage by Tayari Jones

Another Country by James Baldwin

Fruit of the Lemon by Andrea Levy

Girl, Woman, Other by Bernadine Evaristo

Half of a Yellow Sun by Chimamanda Ngozi Adichie

I Know Why the Caged Bird Sings by Maya Angelou

My Sister, the Serial Killer by Oyinkan Braithwaite

Noughts and Crosses by Malorie Blackman

On Beauty by Zadie Smith

Roll of Thunder, Hear My Cry by Mildred D. Taylor

The Autobiography of Malcolm X by Malcolm X

The Fishermen by Chigozie Obioma

The Hate U Give by Angie Thomas

The Joys of Motherhood by Buchi Emecheta

The Lonely Londoners by Sam Selvon

The Private Joys of Nnenna Maloney by Okechukwu Nzelu

The Underground Railroad by Colson Whitehead

We Should all Be Feminists by Chimamanda Ngozi Adichie

Zami: A New Spelling of My Name by Audre Lorde 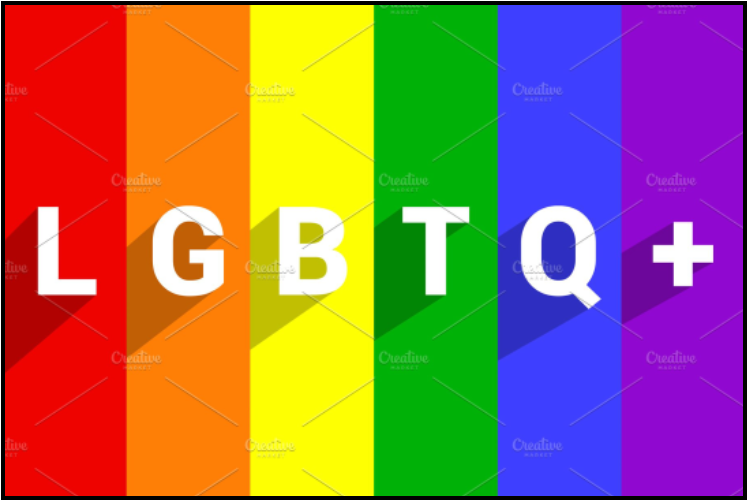 She can’t like anyone else
She knows she’s not like the rest
Like the rest of the girls
She was never the ones
The ones to adore pearls
So what was so wrong?
She knows that she’s different
Left out
She thinks
That maybe to find boys
She’d apply for scouts

But that didn’t work
She felt so lost
“You’re into boys”
Then why has she been tossed?
“You’re into boys.”
But deep down
Her picture of a lover
Is long hair
Rosy lips
And curvy hips
She knows it’s wrong
But maybe
Being gay
Maybe that’s;
That’s okay. 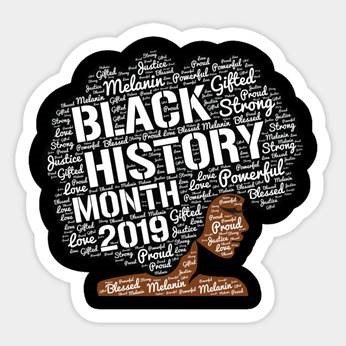 In our school community we celebrate Black History Month throughout the year not just in October!

Here are some great events that took place last year in our school: a Diversity trip to see Ballet Black perform at the Theatre Royal Stratford East, Humanities research on black individuals of significance from History, Geography and Religion, a special assembly from Equal Opportunities Student Group etc.

The 2019 theme is Black migrations.

There will be many events in our school including another diversity / drama trip to see Master Harold and the boys at the National Theatre, a Leadership Team assembly on Black Britain, Student Progress Leader assemblies on The Importance of Celebrating Black History Month etc. 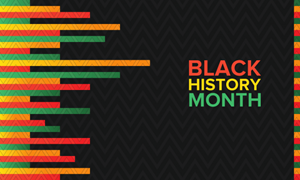 All Year 8 students were lucky to participate in a one hour Diversity workshop in June.

The aim of the workshop was to give our students an opportunity to engage with issues around sexual orientation and gender identity in a safe and open environment.

The key messages were ones of kindness, respect and equality.

In our school we want students to feel free to express themselves and feel valued for their uniqueness.

We listened to LGBT volunteer role models whose powerful stories gave an insight in to the experiences of LGBT people. A Q&A followed which helped develop students’ empathy, understanding and acceptance and challenge stereotypes and prejudice.

Here are their views:

I really enjoyed this workshop because of how everyone came together and expressed their feelings on LGBT+. It’s really wonderful that the charity is spreading more awareness on the subject. I felt like it was a very safe and accepting atmosphere and overall believe everyone should receive a chance to speak to them also -Aliyah 8S

I liked how open the role models were and how open we could be with them. It was nice learning about LGBT+ because it opened my eye more to this community- Rachel 8F

The atmosphere was really inviting and Tanya and Alex’s stories were very inspirational and made me realise that anyone can be who they want to be and we should accept anyone who is part of LGBT+ and never judge them if we don’t know their full stories. Katie was also really helpful with the meanings of terms – Amber 8W

I think all schools should get to have this workshop because it would be really beneficial to people wanting to come out as it would make them feel safe and secure. - Aoife 8S

What I liked about the workshop is that it educates people to be more open minded and confident to discuss LGBT+ topics, which helps us become kinder and more accepting. –Amanta 8S

I really enjoyed this workshop because their stories were really relatable and it was really educational. No one felt awkward or uncomfortable. – Jay Ming 8F

You should accept people for who they are and not treat anyone any differently. – Jessica 8F

I liked the fact that the two role models had the courage and confidence to tell their stories and their message. It was a phenomenal activity and very inspiring.-Destiny 8C

I really enjoyed all of the session and all of the honesty. During the session, we were able to hear both stories and how they felt when they came out. They told us how to be supportive and that was really helpful. - Ornalda 8C

I liked that I learnt new things about the LGBT+ community and how to understand people better, really enjoyed it. – Tatiana 8H

I enjoyed how they told their own stories to inspire us and convey messages such as you should try to be a supportive friend to anyone you know comes out to you because it’s a privilege they trust you. - Anisa 8H.

I have now a bigger understanding of the LGBT+ community. The role models were really brave and I think everybody should see this work shop. – Deja 8H.

I really enjoyed this session as it showed me and others that you shouldn’t be afraid to be yourself. It’s wonderful how Tanya and Alex shared their personal stories to all of us. I found them so inspirational and brave– Ilgin 8G.

I was very proud of how well our students behaved and how respectful and open minded they were. 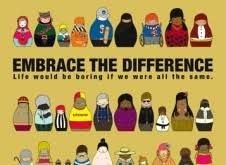 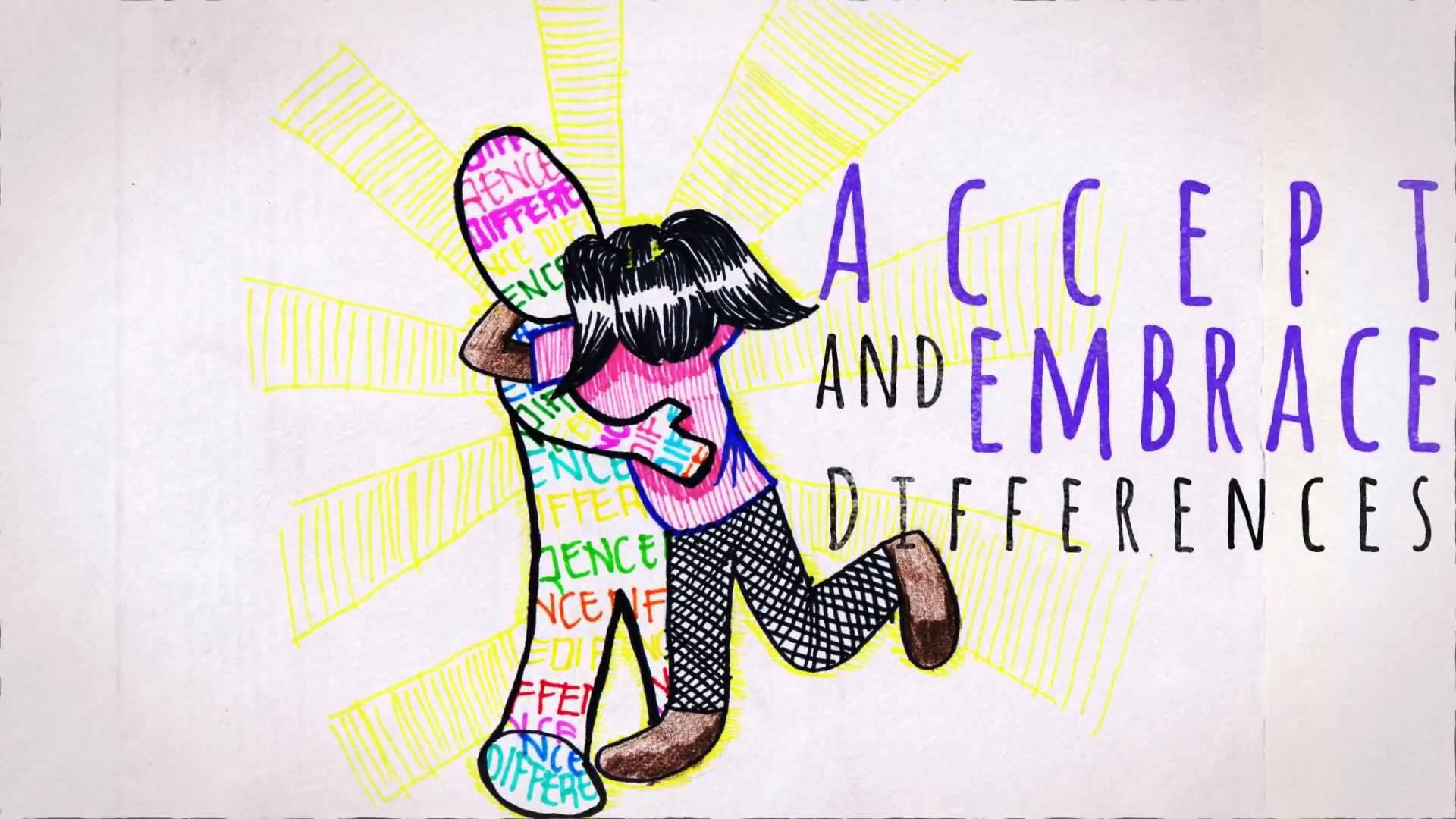 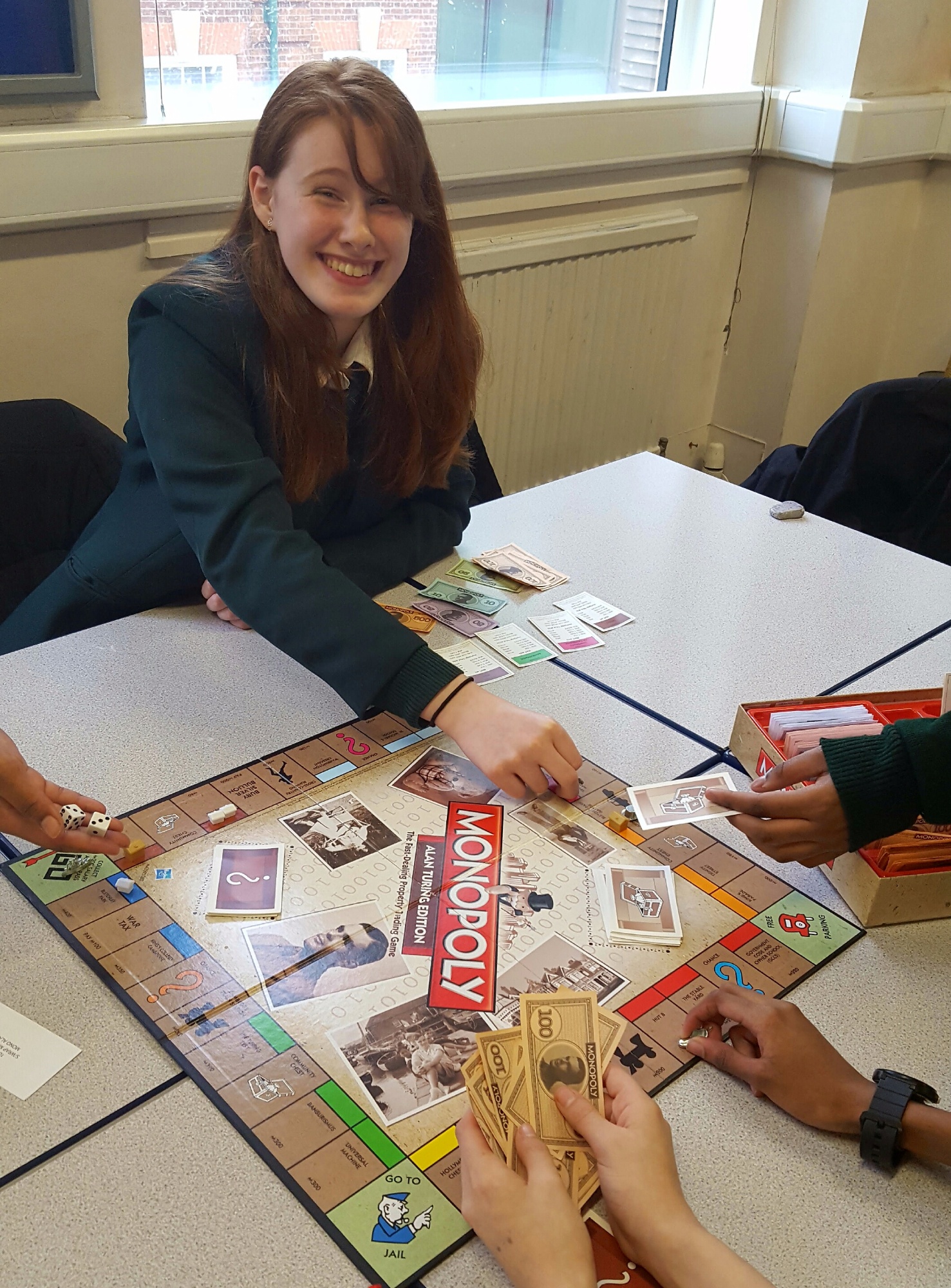 In celebration of the life of Alan Turing, members of Year 9 have been playing the Alan Turing edition of Monopoly. It is based on a hand-drawn version of the game which Alan played over 50 years ago. The original can be seen in the Bletchley Park Museum. 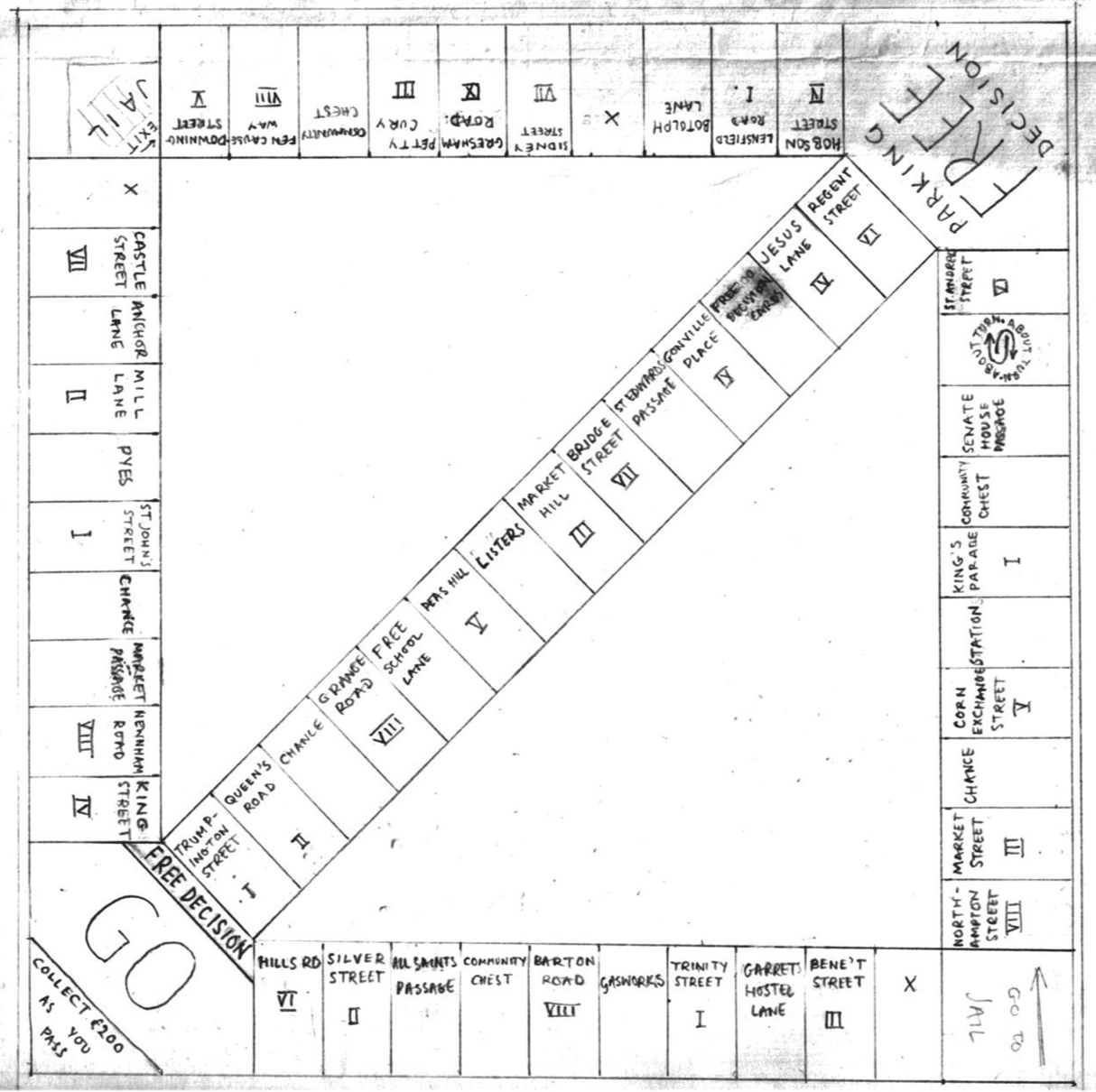