Please click here to view our slides from the Information Evening

Students to attend in allocated cohorts as follows:

During this term, students in Year 11 will be receiving information about continuing their education after they leave this school.  Over the last few years more and more students have chosen to go to colleges/sixth form schools to extend their skills and qualifications.  At the present time the number of job vacancies for school-leavers is small.  Employers increasingly prefer applicants with a good variety of skills, abilities and interests.  Continuing in education is one way of increasing these.

Our College Roadshow is an excellent opportunity to meet and discuss options with established providers of A Levels, BTECs and Apprenticeships. At least 25 stall holders will offer guidance and information about courses, University options, required GCSEs and job opportunities for Post-16 year olds.

We hope as many students as possible, accompanied by their parents/carers, will be able to attend this event. 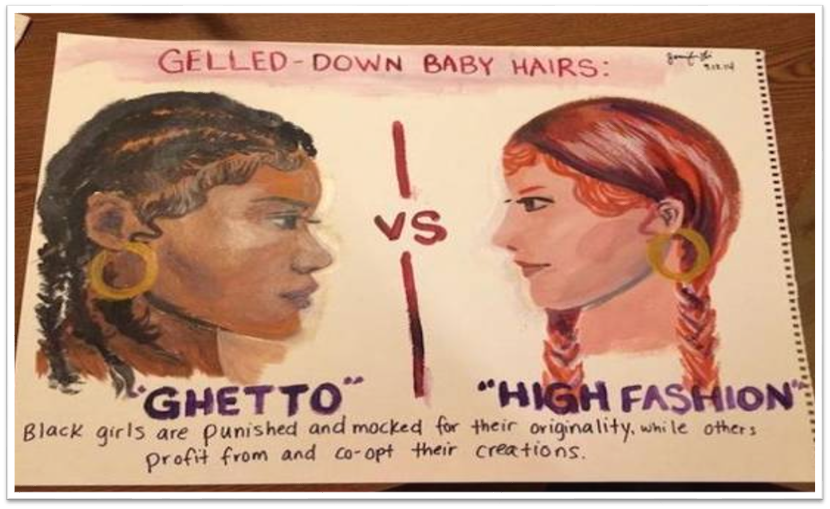 Last term, myself and a few other Year 11 students (Adari, Naima, Jenosha and Maida) took on the role of educating form classes about cultural appreciation vs appropriation. We visited them during form time and we completed almost all the form classes within a few weeks. Our presentations included a variety of information and examples of cultural appropriation, as well as appreciation. We then asked questions to stimulate discussion within the forms and ensured all the students were confident with the terms and could differentiate them by the end of our visit which was the goal of our presentations.
Adari 11G

Here are some observations from Years 7, 8 and 9:

Cultural appropriation refers to the use of objects or elements of a non-dominant culture in a way that doesn't respect their original meaning or reinforces stereotypes. Cultural appreciation is the respectful borrowing of elements from another culture with an interest in sharing ideas and diversifying oneself.
Aiza 7S

Cultural appropriation is when someone takes something from a culture such as a hijab without talking or mentioning the culture it is from, for example Islam. As well as that, it can be when someone of a more dominant culture takes something from a less dominant culture. Another example of this is when a famous actor Zac Efron wrote on Instagram about a picture of dreadlocks that they were ‘just for fun’. On one poster about this it said, “Nothing about my culture is ‘just for fun’”. Cultural appreciation is when somebody takes something from a culture but involves the culture it came from. For example, cultural appreciation would be if you bought some chopsticks but instead of just using them however you want, you learn the traditional way of using it and learn and respect the culture or history behind it.
Emma 7S

8F wanted to comment on the amazing presentation on cultural appropriation and cultural appreciation.
Firstly, Adari and Jenosha were extremely confident in presenting to a class of younger students, and they presented their topic very clearly and concisely. As well as this, they simplified the definition of each of the subjects, so that we could all understand what they were talking about - the whole class definitely learnt something.
Thank you again!
8F and Ms Mithawala

On behalf of 9W, I would like to say that we enjoyed the presentation. It really opened our eyes to how people's culture should and shouldn't be celebrated. Also, we realised that people can offend other people's culture without knowing.
We think this is a presentation we should do annually to keep reminding ourselves of this topic.
Hannan 9W

When the presentation began, as a class we were asked whether we knew the difference between culture appreciation and culture appropriation. I personally felt I was uneducated on this topic and I did not speak then because I didn't understand the difference. However, after the presentation when I was told the difference I felt I needed to do something and openly speak about the topic, so then I spoke out and discovered my passion for these types of topics. I was soon offered an opportunity to be part of the Global Alliance group that our school offers by my form tutor, which I will be joining after the Christmas break!
Zara 9H

We are writing to advise you of a proposed change to the current GCSE History curriculum at Walthamstow School for Girls which will affect your daughter currently in Year 10.  Currently at GCSE all students must study one ‘British Depth Study’.  Under the Edexcel exam board, this is on Paper 2 of the specification and it involves studying the reign of one of four English monarchs between the years of 1066 and 1603.  Since the last changes to the GCSEs, first sat in 2018 at WSFG, we have studied William the Conqueror.

Having listened to feedback from the students who have completed the GCSE course, the overwhelming response has been that they do not enjoy this part of the course as much as they enjoy the other aspects.  We are therefore proposing that we make a change in this area of the course. Many of the students and staff agree that a more interesting option for our students would be to study the reign of Elizabeth I.  We feel that studying the life and challenges facing a female ruler in a role that throughout history has been dominated by men, would be something that the students at our school could relate to and enjoy analysing and evaluating. We believe this would be an exciting change for the students and that it would ensure that they continue to enjoy all aspects of the GCSE History curriculum offered here at WSFG.

We are proposing to begin this unit towards the end of Year 10. As this would be a small change from the GCSE that your daughter signed up for in Year 9, in order to make this change in time for the current GCSE cycle, we need to ensure that we have the consent of parents/ carers.  Therefore, if you do have any objections or concerns with regards to this change, could you please contact me via the school e-mail, so that we could discuss the matter further.

I would also like to take this opportunity to thank you for your continued support of the school, the Humanities faculty, and all students. It is greatly appreciated.

Mr A McLeod
Head of History

We would like to set up a BAME group for students of Black, Asian and other Ethnic Minority groups.

Please complete this Questionnaire so we can make this happen.

The aim of this work is to create a 'safe space' for students to express their views and concerns in a non-judgmental environment where your peers understand and are able to empathise with you.

We would like to hear your views on how we can make this work so that it is an empowering and impactful group for you to be involved in and to make a difference.

Please do complete the Form.

Your view is important and change cannot happen unless you get involved.

A Message from Ms Phillippou about START

I hope this email finds you and your families well.

I wanted to touch base with you with regards to careers and remind you that we have a great resource called Start that you can access.

Start provides lots of helpful advice and activities for you to browse. It has information on post-16 education, university courses, employability skills and on some industries.

Of course, not all of the information or areas listed will be of specific interest to you, but remember to be curious, to explore and to work with what is important and relevant to you. Remember that knowledge is power and the more you know, the better decisions you will be empowered to make in the future.

If you are a student: you can log in using your school profile. Let me know if you need any help. Remember to add your school email to your profile so that you can reset your password when you need to.

If you are a parent / carer: you too can create your own profile using the link above and access the same information as our students. Here are some instructions to help you: https://sway.office.com/ug7OOWGBat4Ww6eB?ref=Link

I hope that this is helpful.

WSFG is working in partnership with various organisations in the Borough to raise awareness of violence against women and girls in Waltham Forest.

As a girl's school, we are a hub for young women to learn about this external challenge that can affect the well being of all. This project is aimed at Years 8-10 in particular.

The main focus of the project is building support in preventing and offering early help in relation to VAWG.

WSFG is one of a few secondary schools in Waltham Forest to embrace this whole school approach to this issue.